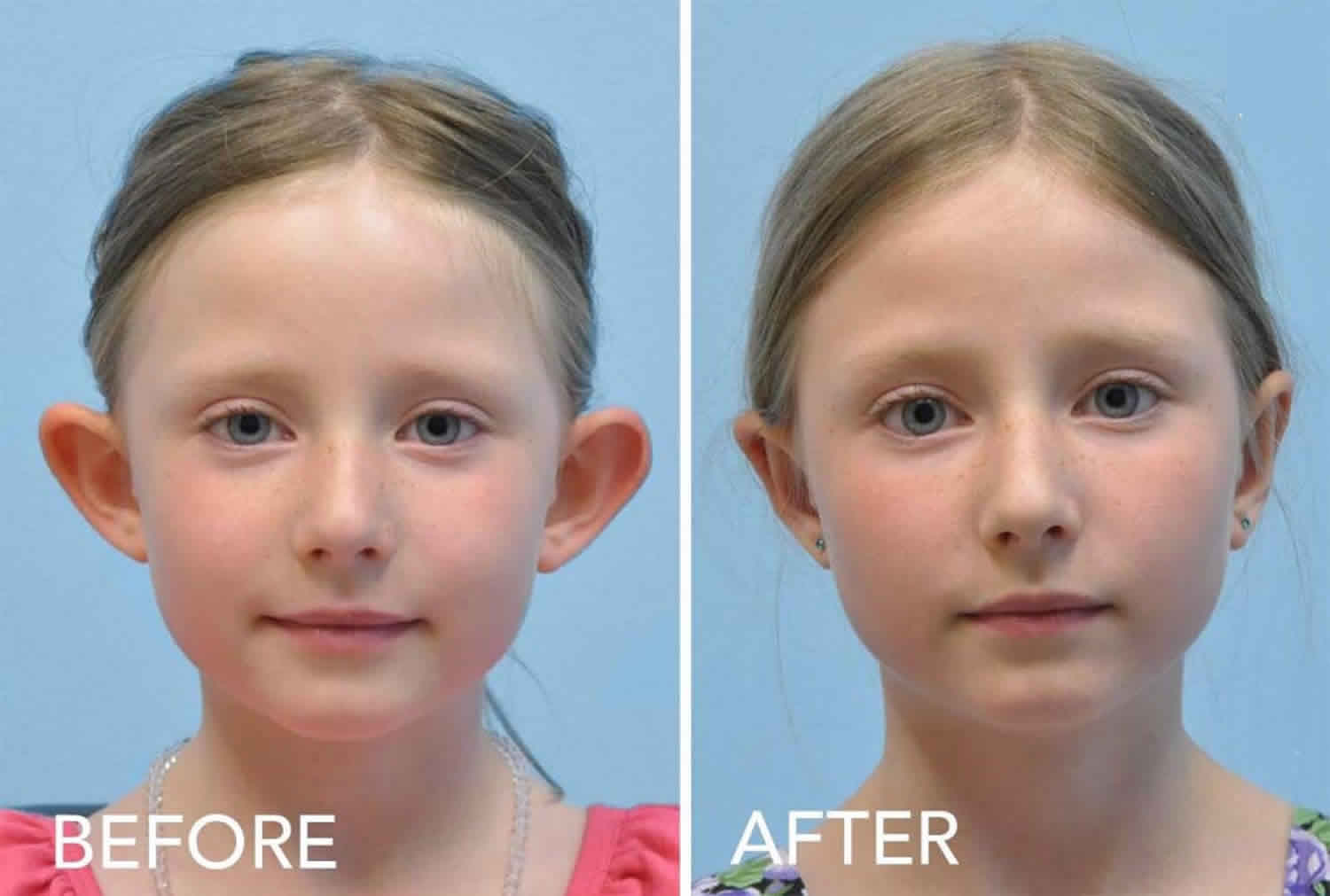 Protruding ears also called prominent ears, are ears that stick out more than 2 cm from the side of the head. Protruding ears don’t cause any functional problems such as hearing loss.

In most people, protruding or prominent ears are caused by an underdeveloped antihelical fold. When the antihelical fold does not form correctly, it causes the helix (the outer rim of the ear) to stick out.

Most people with protruding ears also have a deep concha, the bowl-shaped space just outside the opening of the ear canal, which pushes the entire ear away from the side of the head.

The ear is made primarily of cartilage covered by skin. The earlobe has no cartilage and is made of skin and fat. Although there are some muscles attached to the ear, most people cannot control them, which is why only a small percentage of people can wiggle their ears. The external ear is supplied by four different sensory nerves.

There are both non-surgical and surgical options for treating protruding ears.

By 6 weeks of age, these levels of maternal estrogen fall to normal, and the ears become more rigid and less pliable. This is why early intervention is so important. If neonatal ear deformities are recognized early enough, they can often be successfully treated by non-surgical molding, preventing the need for surgery later in life.

Because some ear deformities will self-correct over time, your child should be monitored closely for the first 7 to 10 days of life. If the shape or deformity of the ear doesn’t improve in the first week or two, non-surgical infant ear molding may be recommended as the most appropriate treatment approach.

First, your child will be fit with a non-surgical molding appliance. For the best results, the device should be applied within the first one to two weeks of life. The device is worn continuously for two weeks.

After two weeks, your child’s doctor will examine your child’s ear. If the deformity has not been corrected yet, a new device will be reapplied. This process is repeated every two weeks until acceptable improvement or correction is seen.

Most ears, if treated early, respond to ear molding to improve the shape of the ear. In general, the younger your child is when treatment for prominent ears is started, the shorter the duration of therapy. However, children a few months of age have been treated successfully with non-surgical ear molding.

Surgery to correct protruding ears is called a setback otoplasty. It can be performed as early as 5 to 6 years of age when ears are almost fully grown.

The procedure to correct protruding ears is usually performed through an incision behind the ears. The cartilage is reshaped to create an antihelical fold. This will support the ear in its new position closer to the head. Sometimes, additional sutures are placed on the back of the conchal to bring the entire ear closer to the side of the head. A postoperative dressing is used to help keep the ears in their new positions. This dressing will typically stay in place for 1 to 2 weeks. Although a general anesthetic is needed, the operation is done on an outpatient basis and your child will be able to return home the same day.

Insurance companies often consider otoplasty to be a cosmetic operation, and therefore they may not cover the cost of this procedure. Before cosmetic ear surgery, discuss the procedure with your insurance carrier to determine what coverage, if any, you can expect.

To correct prominent ears that lack folds, an ENT (ear, nose, and throat) specialist, or otolaryngologist, places permanent stitches in the upper ear cartilage and ties them in a way that creates a fold to prop up the ear. Scar tissue will form later, holding the fold in place. Corrective surgery, called otoplasty, may be considered on ears that stick out more than 4/5ths of an inch (2 cm) from the back of the head. It can be performed at any age after the ears have reached full size, usually at five- or six-years-old. Having the surgery at a young age has two benefits: (1) the cartilage is more pliable, making it easier to reshape, and (2) the child will experience the psychological benefits of the cosmetic improvement.

An ENT specialist begins the surgery with an incision behind the ear where the ear joins the head. In addition, ears may also be reshaped, reduced in size, or made more symmetrical. The reshaped ear is then secured in position while healing occurs. Typically, otoplasty surgery takes about two hours. The soft dressings over the ears will be used for a few weeks as protection, and the patient usually experiences only mild discomfort. Headbands are sometimes recommended beyond that for a month following surgery.