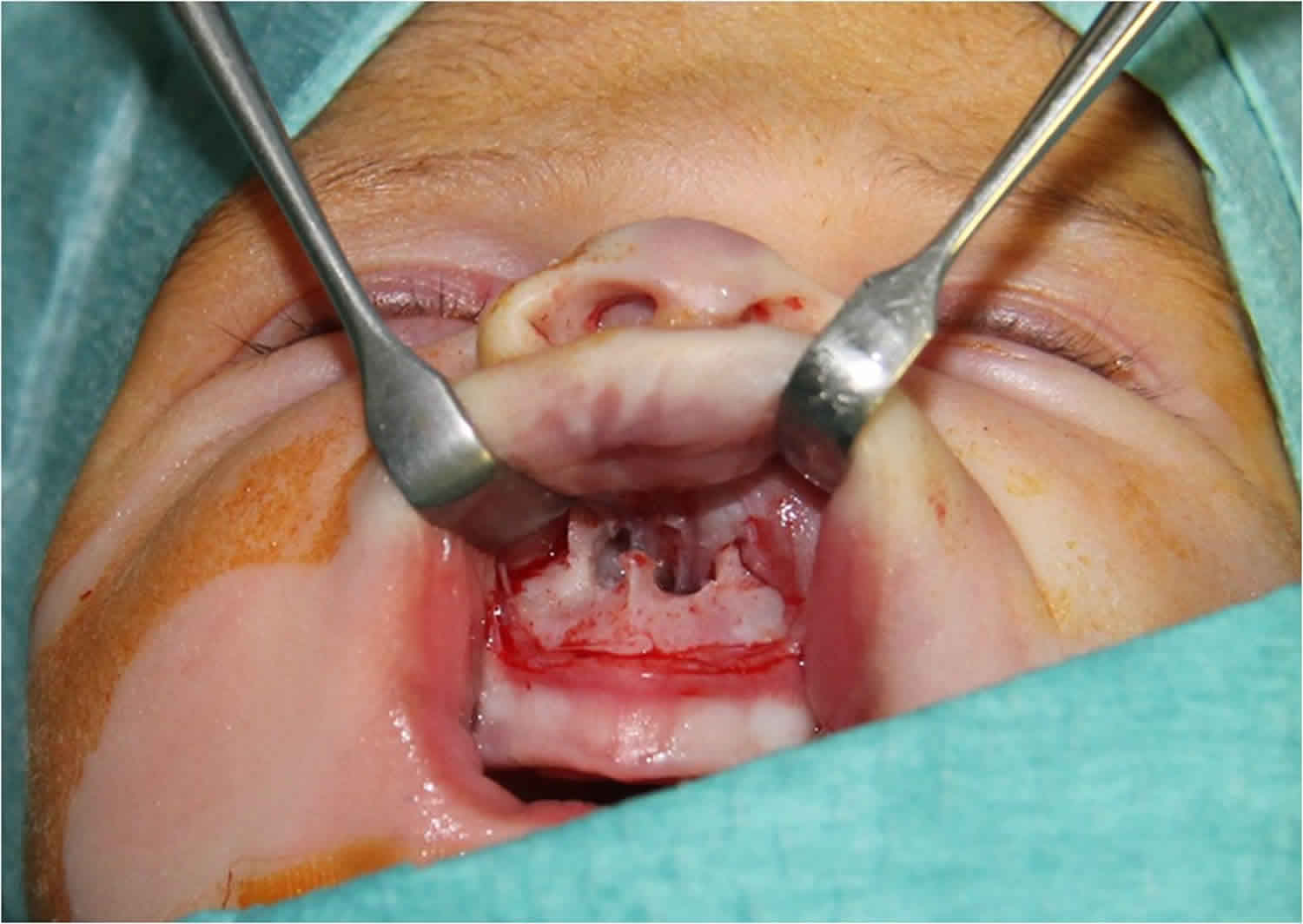 Congenital nasal pyriform aperture stenosis is a very rare and potentially lethal form of upper airway obstruction in newborns where the front opening of the nose is narrow due to an overgrowth in the upper jaw bone that can lead to severe respiratory distress in newborns 1). Congenital nasal pyriform aperture stenosis is a rare condition and its prevalence is unknown, that may present as an isolated malformation or may be associated with other craniofacial anomalies 2). Pyriform aperture stenosis is sometimes associated with other abnormalities, including the presence of a single central incisor tooth and pituitary abnormalities. Immediate recognition and appropriate therapy are mandatory for this potentially life-threating condition.

Because infants are obligatory nasal breathers until 6–8 weeks of age, any form of nasal airway obstruction could cause severe distress symptoms; thus, early diagnosis and treatment are mandatory 3).

Clinically, congenital nasal pyriform aperture stenosis shows unspecific symptoms of nasal airway obstruction such as apnoic crisis, episodic cyanosis and inability to nurse 5). Congenital pyriform aperture stenosis should be suspected in newborns with clinical signs of severe nasal obstruction associated with a difficulty to pass a small catheter though the anterior nasal valve.

Treatment depends on the severity of obstruction, symptoms, and prognosis of the child. Establishing a secure airway is the priority 6). Conservative treatment may be prioritized, with close follow up until growing expansion of the nasal cavity 7). This will prevent surgical distress and long-term effects on maxillofacial growth, e.g., asymmetry. Nasal humidification and irrigation, topical steroids, decongestants, and aspiration are used. This conservative management was recommended in those patients with multiple anomalies and a poor prognosis 8). Difficulty feeding and respiratory distress are important factors to be considered when indicating surgical treatment, and this may not be related to the actual size of the pyriform aperture 9). Success is related to with associated comorbidities, and the need for reinterventions is usually seen in cases of craniofacial dysmorphism 10).

Surgical access can be transnasal or sublabial 11). The transnasal access does not apply to newborns due to the small dimensions and poor exposure that increases the risk of trauma to soft tissue 12). Surgical correction of the congenital pyriform aperture stenosis though a sublabial approach followed by a nasal stenting revealed to be most effective treatment for these patients.

In the sublabial approach, a subperiosteal flap is bluntly dissected to expose the pyriform aperture. A diamond burr is used to enlarge the lateral and inferior walls of the pyriform aperture anterior to the inferior turbinate to prevent lesion to the nasolacrimal duct. A satisfactory opening is achieved when a 3.5-mm diameter endotracheal cuffed tube can be pushed through the nose 13). Usually stents are positioned and fixed in both nostrils to avoid granulation tissue and restenosis, and can be left in for 3 to 14 days 14).

Surgical complications are related to bone dissection and granulation tissue formation. Trauma to the periosteum, nasal mucosa, dental roots, and nasolacrimal duct should be avoided. Patients with stents should be closely followed up due to a risk of restenosis when removed early or tissue necrosis when removed too late 15). Merea et al. 16) published a series of six patients who underwent the classic sublabial procedure associated with bilateral inferior turbinectomy without stenting. These researchers reported successful follow-up, with no cases of restenosis or septal perforations. Interference with facial growth may be a complication but is not frequently reported 17).

A different treatment modality, which is less invasive and has a lower risk of complications, has been proposed by Gungor and Reiersen 18). The researchers reported a case of congenital pyriform aperture stenosis dilation with a 7-mm balloon and stenting for 12 days. In this report, the researchers justified the use of stents due to the natural plasticity of the bone and cartilages of the maxillofacial structure secondary to the effects of estrogen. They reported 1 year of follow-up with no restenosis. Dysphagia and swallowing disorders should be evaluated after surgery even in those cases with isolated congenital pyriform aperture stenosis because some symptoms may persist. Sultan et al. 19) reported an elevated risk of malnutrition and failure to thrive even after surgical correction. 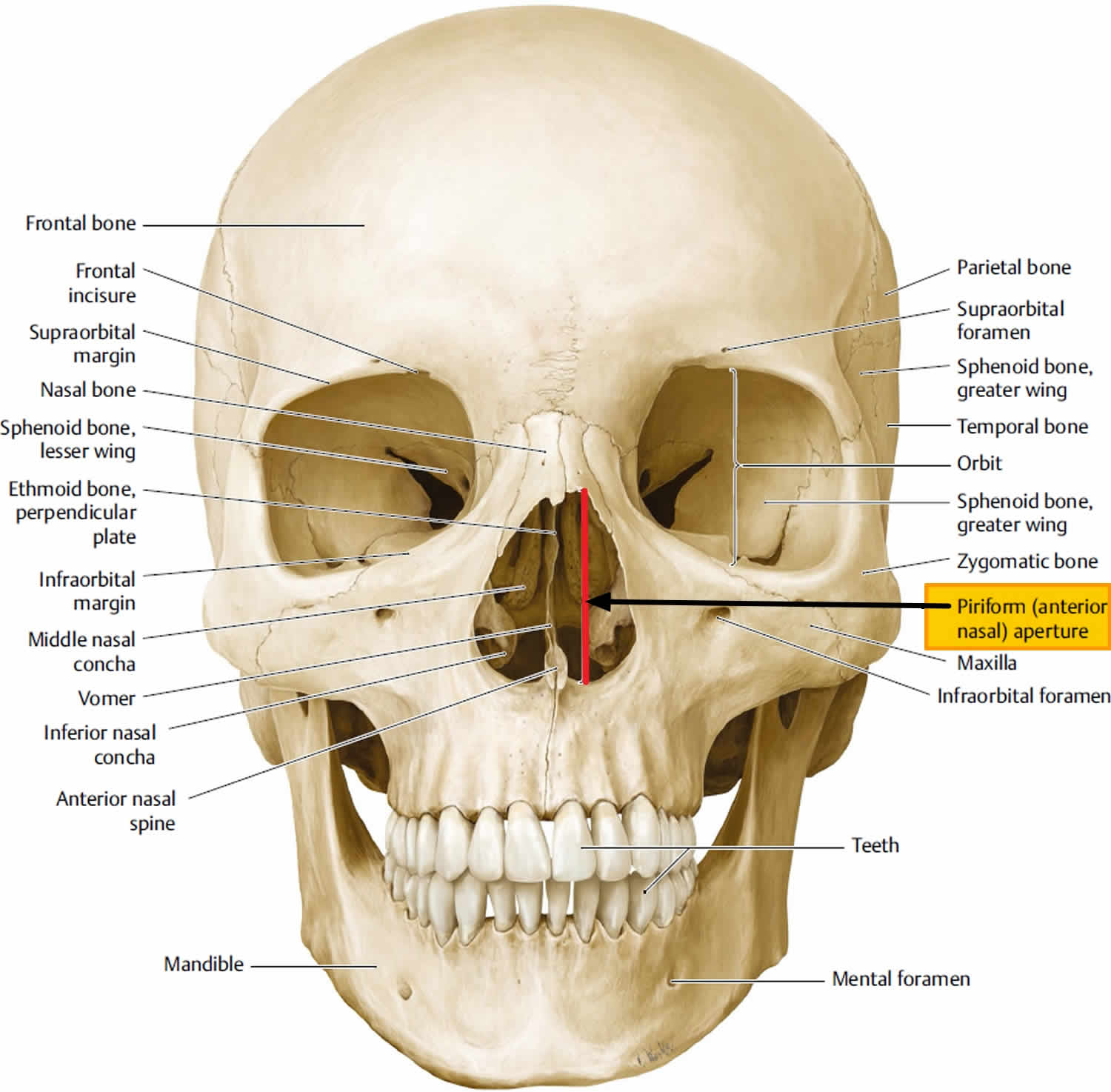 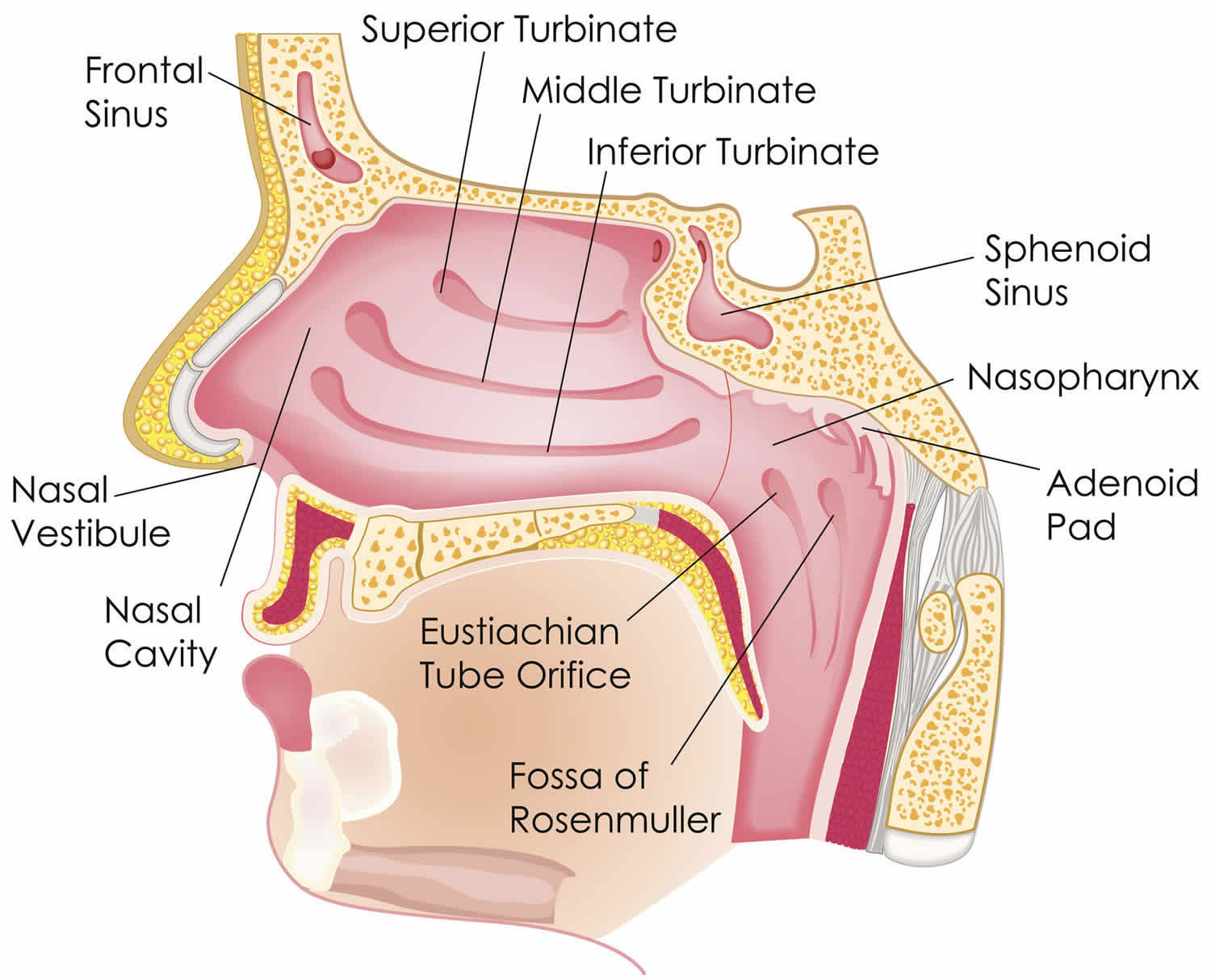 Newborns with congenital nasal pyriform aperture stenosis often have difficulty moving air through their nose shortly after birth. Since infants breathe only through their nose until they are about 4 months old, they are unable to compensate by breathing through their mouths. The degree of respiratory distress depends on the degree of nasal narrowing. Feeding and weight gain are often impaired as well.

The diagnosis of congenital nasal pyriform aperture stenosis is based on clinical evaluation, including nasal endoscopy and especially CT scans. The inability to pass a 5F catheter and a radiographically measured pyriform opening < 8–10 mm in a full-term infant are considered diagnostic. If holoprosencephaly (an abnormality of brain development in which the brain doesn’t properly divide into the right and left hemispheres) is suspected by the presence of a central maxillary incisor, encephalic CT scan or magnetic resonance imaging (MRI) should also be performed 23). Once the diagnosis has been confirmed, the treatment approach must take into account the severity of the clinical condition, any associated comorbidities, and the neonate’s global prognosis.

If your baby has congenital nasal pyriform aperture stenosis, she will need to be evaluated for both airway and feeding issues. Management of the airway often requires a combination of supportive, medical and surgical care. Feeding and swallowing issues are very common in children with these conditions and often need to be addressed by speech pathologists and gastrointestinal specialists. Children born with syndromes often need other subspecialty evaluations (cardiology, ophthalmology, etc.) and benefit from the coordinated care provided in the multidisciplinary-setting of the Center for Pediatric Airway Disorders.

Because neonates are obligatory nasal breathers, any condition that prevents normal nasal airflow must be diagnosed and treated correctly. Treatment depends on the severity of pyriform aperture stenosis (unilateral or bilateral), how much it affects the child’s breathing and eating as well as what other medical conditions the patient has.

Initial management of congenital nasal pyriform aperture stenosis involves the establishment of a secure airway by McGovern nipple placement or endotracheal intubation, with appropriate monitoring in the intensive care unit until the exact cause and severity of nasal obstruction have been established. In cases of mild congenital nasal pyriform aperture stenosis, a nonsurgical approach involving the positioning of silastic stents in the nasal cavity and the use of local decongestants is preferable 24). However, the small dimensions of the nasal stents may lead to their occlusion and make daily cleaning very difficult, thus increasing the risk of obstruction and soft-tissue injury during cleaning and repositioning.

In cases of moderate or severe nasal pyriform aperture stenosis, the approach is surgical and involves pyriform aperture enlargement through an endo-oral sublabial approach to reshape the stenotic area with burs. This method is safe and enables good field exposure, prevents damage to the nasolabial soft tissues, and does not cause visible scarring. Morbidity is irrelevant and results are achieved immediately after surgery 25).

A transnasal approach has also been described, but it is not advisable in neonates because of the reduced dimensions of anatomic structures, which increase the risk of soft-tissue trauma 26).

The surgical procedure begins with bilateral exposure of the pyriform aperture to free its bony margin, leaving the mucoperiosteum intact along the nasal floor and pyriform aperture. Drilling of the nasal floor must be avoided to prevent damage to the tooth buds 27). The aperture is considered satisfactory when it allows for the passage of a 3.5-mm endotracheal tube stent. The bony procedures should be performed anterior to the inferior turbinate to avoid nasolacrimal duct injury 28).

In cases of associated choanal atresia, excess membrane and bony tissue should also be removed. The use of endoscopy is currently recommended to more safely control the posterior nasal fossa and the positioning of nasal stents.

To reduce recurrence and scar-related stenosis, the use of nasal stents is recommended. The choice of device should be based on the presence of choanal atresia. In isolated congenital nasal pyriform aperture stenosis, the use of short nasal conformers, such as those routinely applied in cleft patients, is preferable because of their easier management: they are more comfortable for the patient, cleaning and replacement are easier and safer, and damage related to aspiration and displacement are avoided. On the other hand, the use of longer soft silastic nasal stents (o.d. 3.96 mm, i.d. 3.0 mm) is mandatory in the presence of choanal atresia to prevent obstructive scarring in the posterior nasal area and to ensure the stability of the surgical enlargement. We typically retain the stents for about 3 weeks if choanal atresia is present and for only 6–7 days in cases of isolated congenital nasal pyriform aperture stenosis 29). 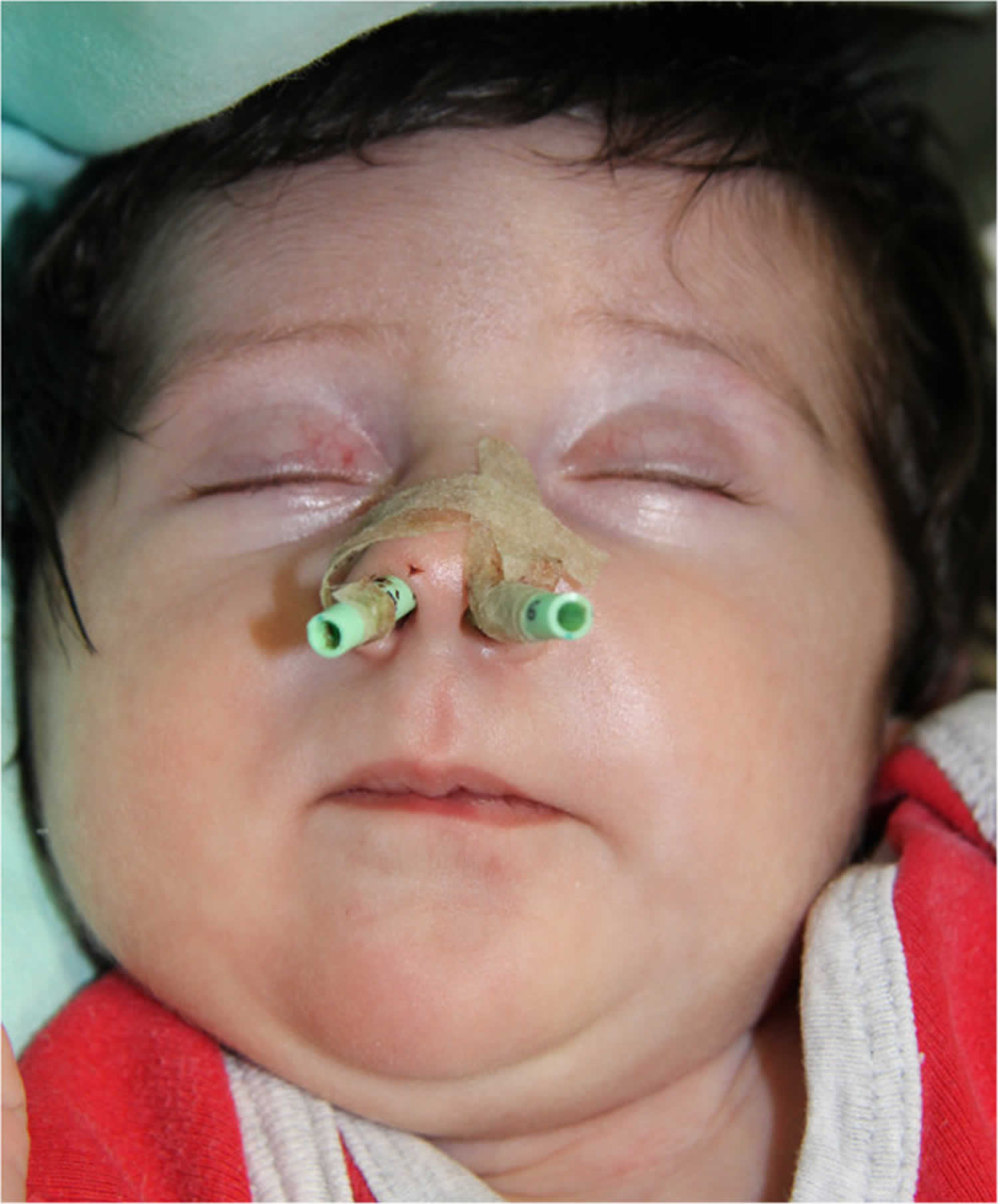 A child with a mild case of congenital nasal pyriform aperture stenosis may not have respiratory distress or significant feeding issues. These patients may initially be managed with close observation and occasionally supplemental oxygen. Your doctor may also recommend using a nasal saline to keep the nasal linings healthy and free of discharge. Most often patients with mild congenital nasal pyriform aperture stenosis will improve over time with the growth of the airway.

Infants with severe congenital nasal pyriform aperture stenosis should have surgery as soon as they are stable and have been evaluated for other anomalies. The major goal of the surgical repair is to open the nasal airway sufficiently, allowing the infant to breathe through her nose without difficulty. There are several approaches available to accomplish this goal.

Surgical management of congenital nasal pyriform aperture stenosis is often performed using a sublabial approach, where an incision is made inside the upper lip where it meets the gums to access the bony openings into the nose. The encroaching bone is then removed using a curette or drill. Temporary stents are often necessary in order to maintain the repair site for a few weeks as the area heals. Once the openings are enlarged, the infant’s breathing and feeding problems are resolved.