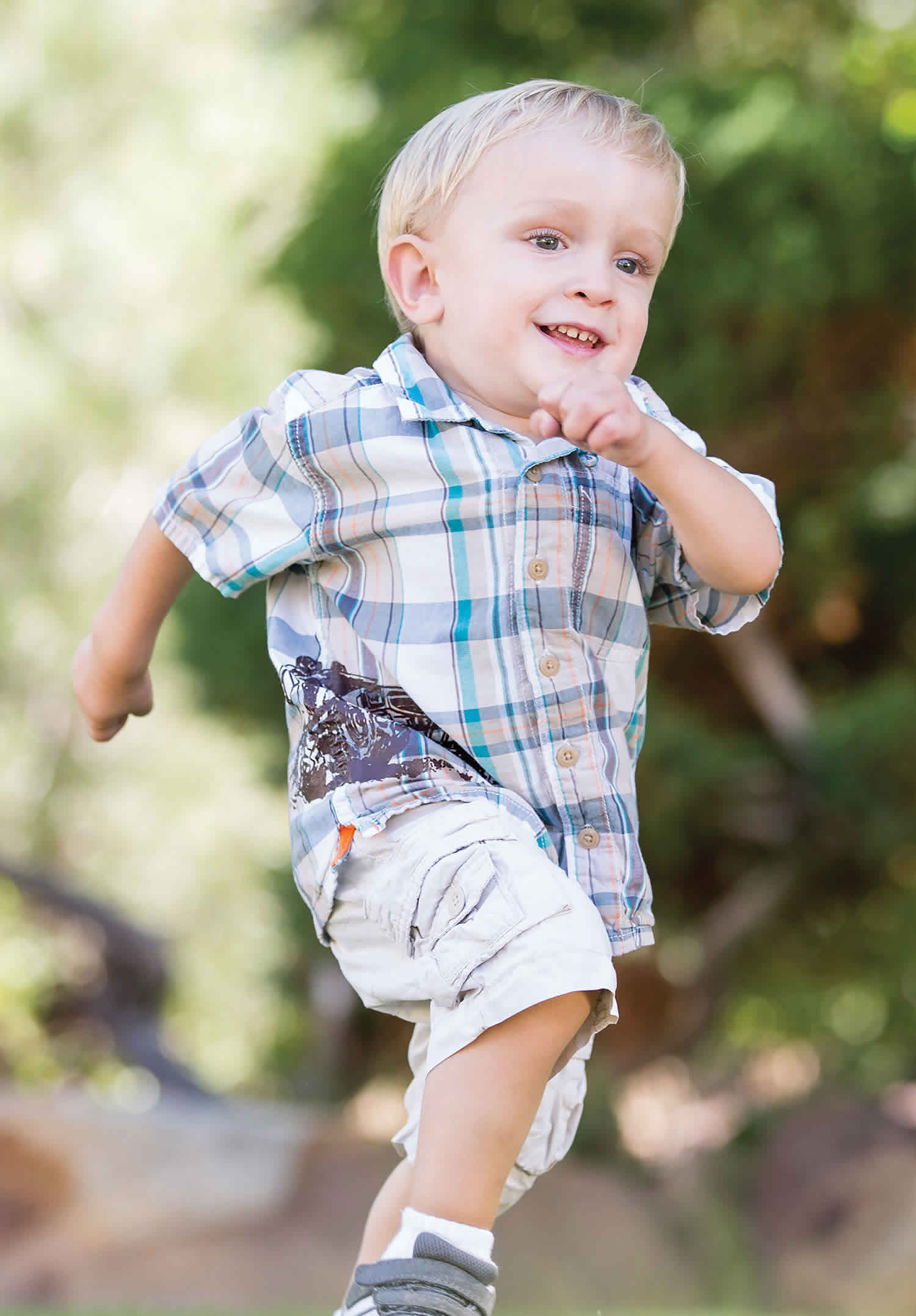 What is Morquio syndrome

Morquio syndrome also called mucopolysaccharidosis type IV (MPS IV), is a rare genetic metabolic condition in which the body is unable to break down long chains of sugar molecules called glycosaminoglycans (GAG) 1). Glycosaminoglycans (GAG) are long chains of sugar molecules used in the building of bones, cartilage, skin, tendons and many other tissues in the body. These sugar chains are submicroscopic and cannot be seen with the eye, but can be studied using special scientific instruments and analytical methods. Toxic levels of glycosaminoglycans (GAG) sugars accumulate in cell structures called lysosomes, leading to the various signs and symptoms associated with the condition. These glycosaminoglycans sugars accumulate in cells, blood, tendons and ligaments, causing damage over time. There is also evidence that GAG are bioactive. This means that their accumulation can cause activation of other chemical reactions in the body (i.e. they may trigger inflammation in joints). Babies may show little sign of the disease, but as more and more glycosaminoglycans (GAG) accumulates, symptoms start to appear. Sugar or foods normally eaten will not affect whether there is more or less buildup of glycosaminoglycans (GAG). Affected children generally develop features of Morquio syndrome (MPS IV) between the ages of 1 and 3. These signs and symptoms may include abnormalities of the skeleton, eyes, heart and respiratory system.

Individuals with Morquio syndrome (MPS IV) are missing one of two specific enzymes which are essential in the breakdown of certain GAG called keratan sulfate (KS) and chondroitin-6-sulfate (CS).

There are two forms of Morquio syndrome (MPS IV):

Both forms are inherited in an autosomal recessive manner. Treatment is based on the signs and symptoms present in each person 2).

The exact prevalence of Morquio syndrome (MPS IV) is unknown, although it is estimated to occur in 1 in 200,000 to 300,000 individuals. MPS IVA (95% of individuals affected by MPS IV) occurs more often than MPS IVB (5% of affected individuals).

Mutations in the GALNS and GLB1 genes reduce or completely eliminate the activity of the enzymes produced from these genes. Without these enzymes, GAGs accumulate within cells, specifically inside the lysosomes. Lysosomes are compartments in the cell that break down and recycle different types of molecules. Conditions such as Morquio syndrome (MPS IV) that cause molecules to build up inside the lysosomes are called lysosomal storage disorders. In Morquio syndrome (MPS IV), GAGs accumulate to toxic levels in many tissues and organs, particularly in the bones. The accumulation of GAGs causes the bone deformities in this disorder. Researchers believe that the buildup of GAGs may also cause the features of Morquio syndrome (MPS IV) by interfering with the functions of other proteins inside lysosomes and disrupting the movement of molecules inside the cell.

These possible outcomes occur randomly. The chance remains the same in every pregnancy and is the same for boys and girls.

Figure 1 illustrates autosomal recessive inheritance. The example below shows what happens when both dad and mum is a carrier of the abnormal gene, there is only a 25% chance that they will both pass down the abnormal gene to the baby, thus causing a genetic condition. 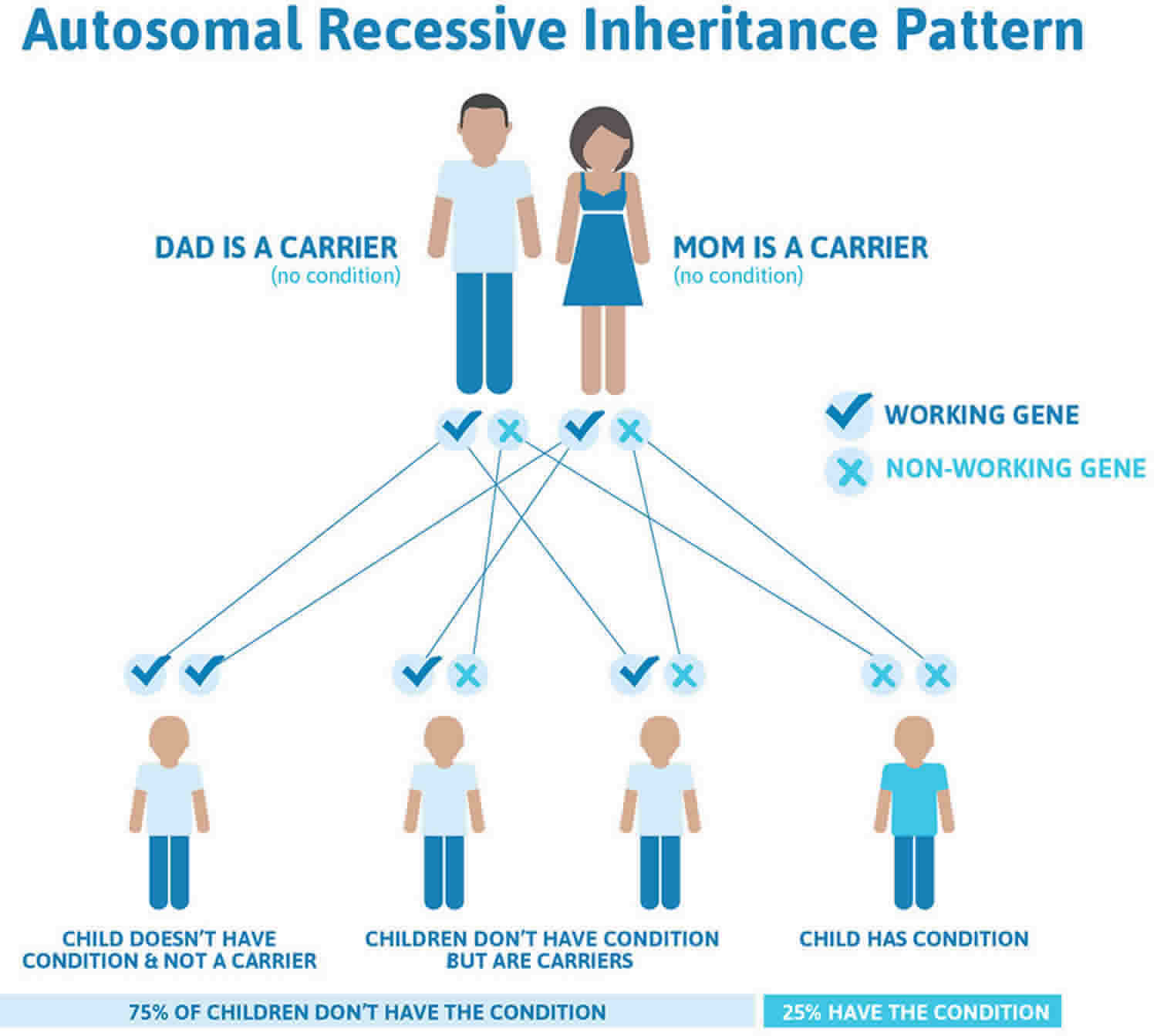 People with specific questions about genetic risks or genetic testing for themselves or family members should speak with a genetics professional.

Resources for locating a genetics professional in your community are available online:

People affected by Morquio syndrome (mucopolysaccharidosis type IV or MPS IV) often develop signs and symptoms of the condition in early childhood between ages 1 and 3. Morquio syndrome is considered progressive; however, the rate at which symptoms worsen varies significantly among affected people. All people affected by Morquio syndrome develop skeletal problems such as scoliosis, knock-knees, short stature, pectus carinatum and variety of other abnormalities of the ribs, chest, spine, hips, and wrists 3). Another common feature of Morquio syndrome (MPS IV) is an underdeveloped odontoid process (a peg-like bone in the neck that helps stabilize the cervical vertebrae). This can misalign, compress and damage the spinal cord, leading to paralysis or even death 4).

Other signs and symptoms of Morquio syndrome include 5):

Skeletal X-rays typically show marked flattening of the vertebra. The long bones of the arms and legs are characteristically shorter and thicker than normal. The skull is large for the rest of the body. The connection between the first and second vertebrae in the neck is poorly developed and this abnormality can be life threatening. A trivial injury may cause the two vertebrae to slip on each other and compress the spinal cord. Surgery to stabilize the upper cervical spine, usually by spinal fusion, can be lifesaving but life expectancy is decreased somewhat despite surgery. The deformity of the chest causes a strain on the heart and lungs, which may eventually cause respiratory failure.

Figure 2. Morquio syndrome ulnar deviation of both wrists and joint enlargement in a male age 15 years with MPS IVA 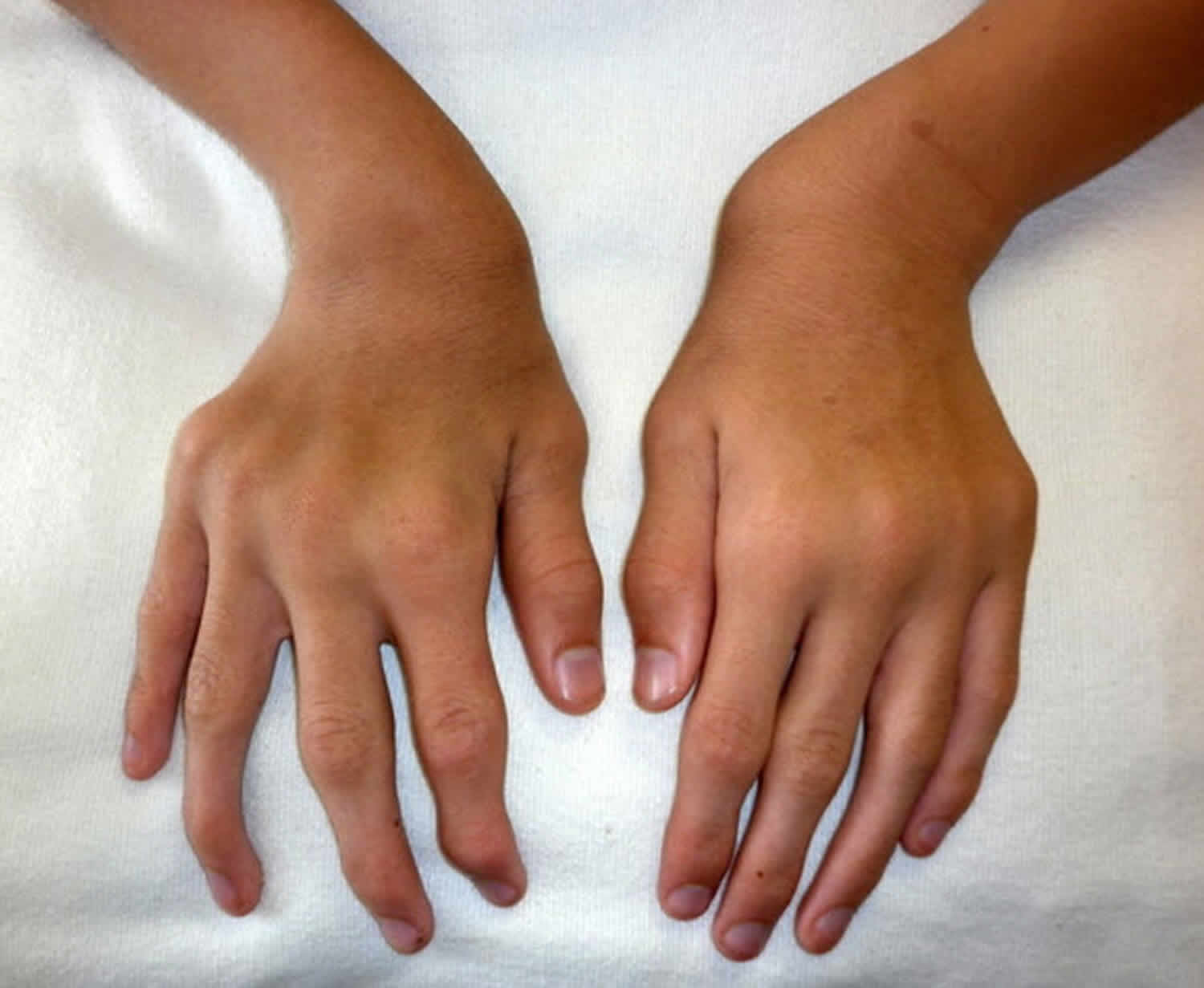 Figure 3. Morquio syndrome with shortened forearm and ulnar deviation of the wrist in a male age 15 years with MPS IVA 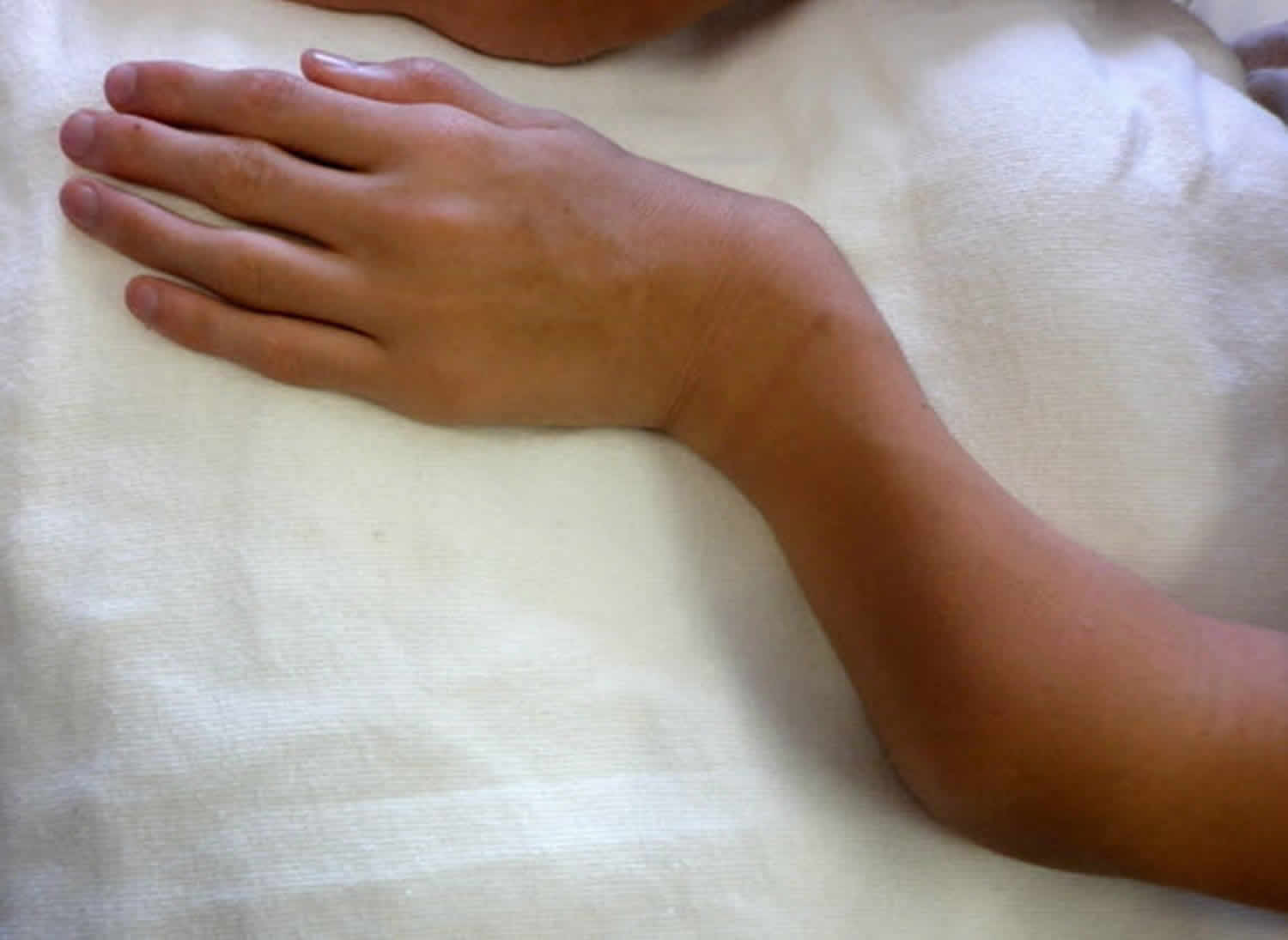 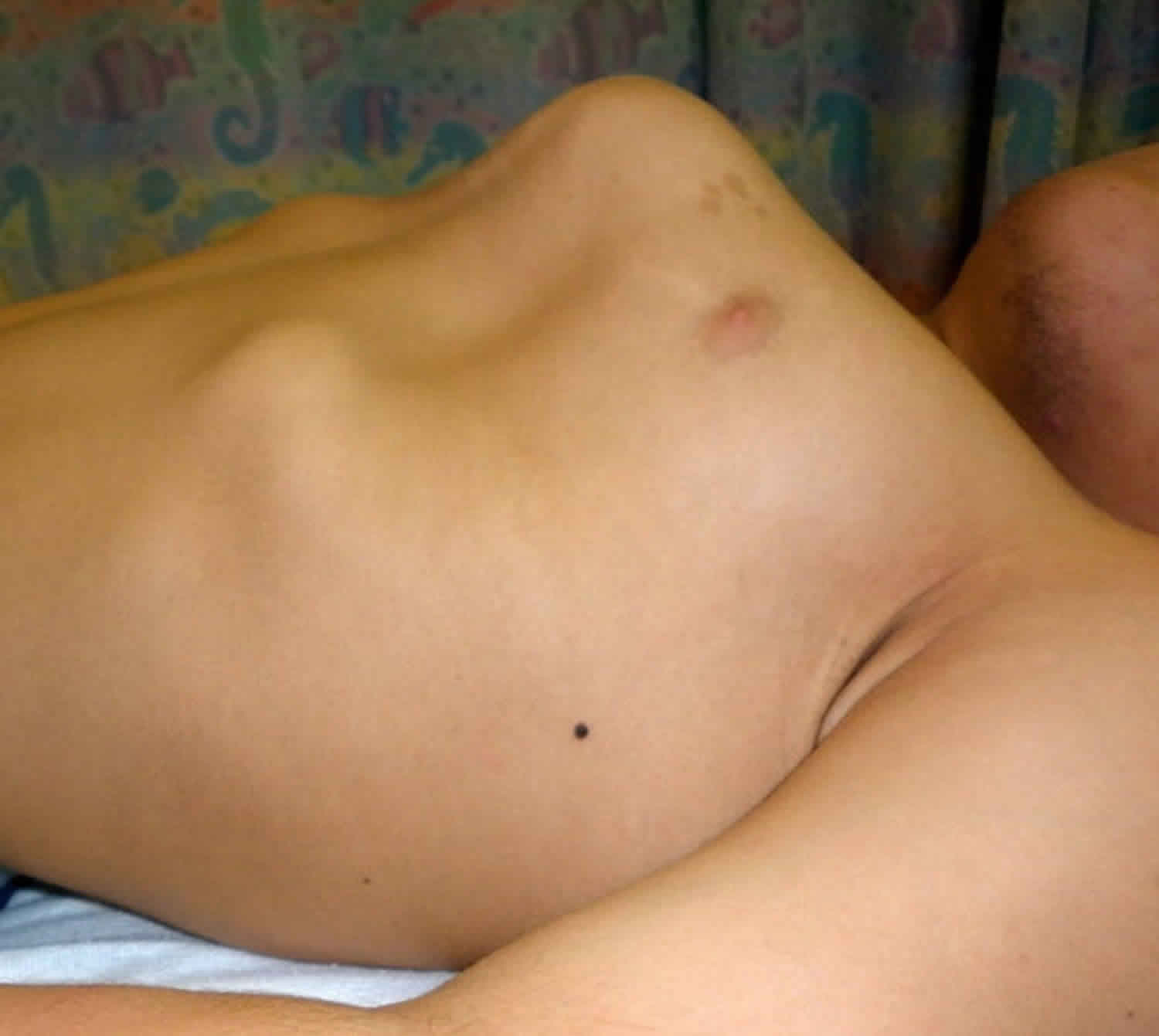 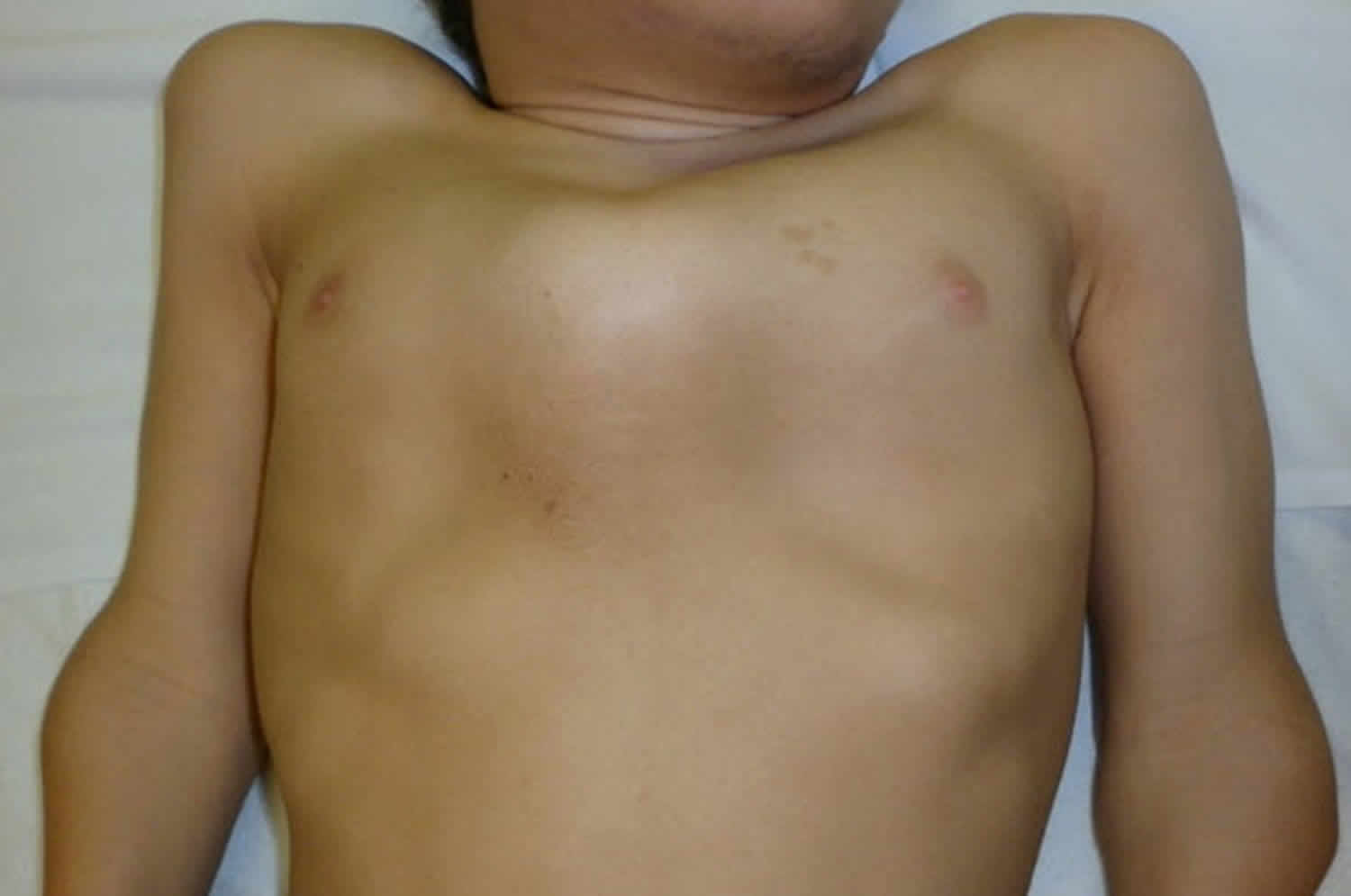 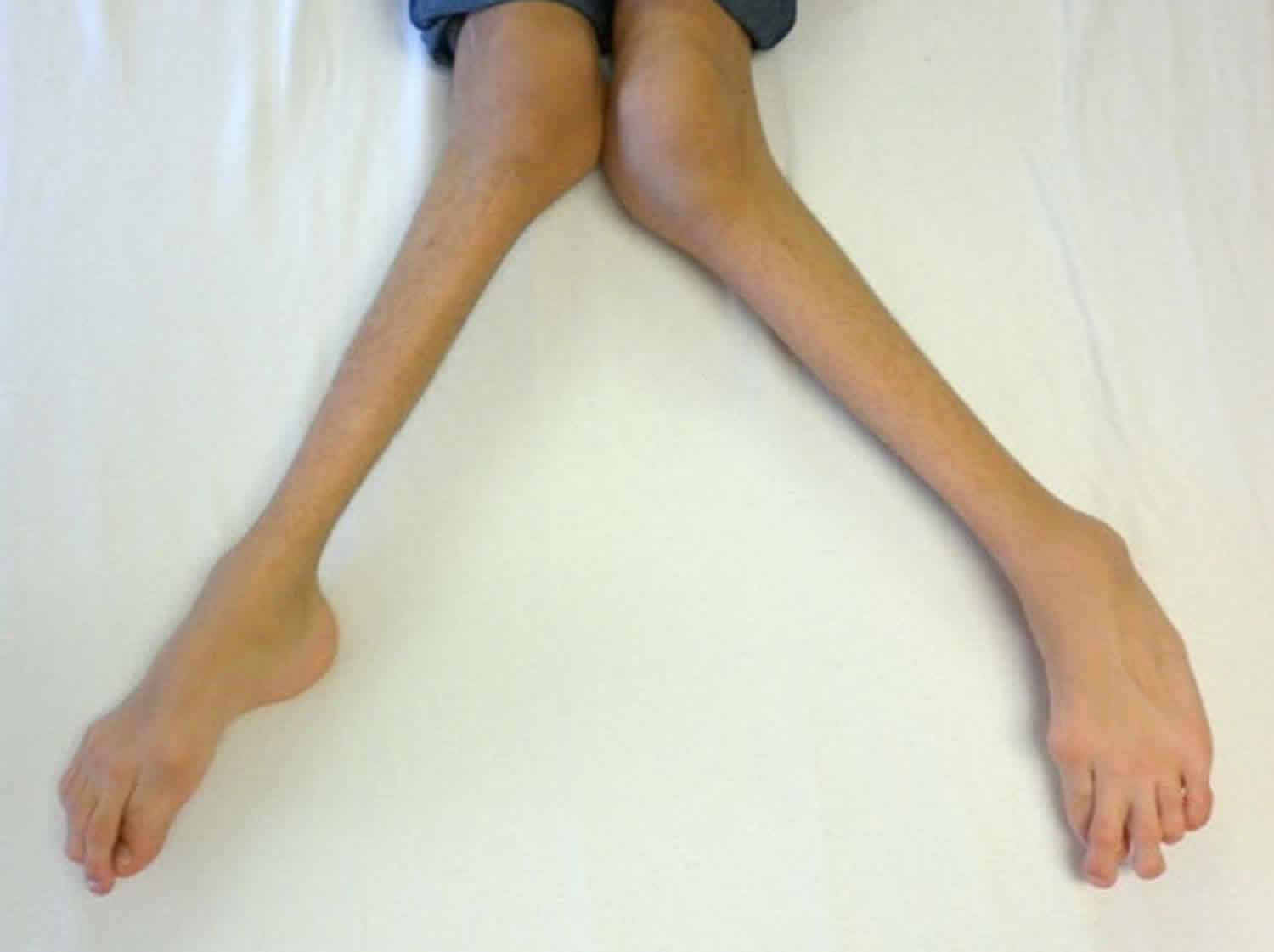 Diagnosis of Morquio syndrome starts with a thorough medical history and physical exam.

MPS IVB diagnosis is confirmed by the finding of a beta-galactosidase deficiency in blood or skin cells and/or molecular genetic testing to identify GLB1 gene mutations.

There is no treatment for MPS IVB (Morquio B syndrome).

Other treatment of MPS IV is symptomatic and supportive. Surgery to decompress and fuse the bones of the upper neck to the base of the skull can prevent destabilization of the cervical vertebrae and potential damage to the spinal cord.

Surgeons may also play a crucial role in treating affected individuals. The placement of a bioprosthetic or prosthetic valve may be required for affected individual with ventricular hypertrophy (overgrowth). Enlarged tonsils and adenoids may need to be removed in order to relieve upper-airway obstruction and sleep apnea. Additionally, ventilation tubes and hearing aids may be needed for individuals with hearing loss. Penetrating keratoplasty (corneal replacement) may be needed to treat corneal opacification (scarring or clouding of the cornea), which causes impaired vision.

Since children with MPS IVA are of normal intelligence, they usually attend regular classes, but they made need to sit close to the front of the classroom if they have difficulties hearing or seeing. They may also need to use a wheelchair around school grounds.

Genetic counseling is recommended for affected individuals and their families.

Disease severity varies significantly for individuals with Morquio syndrome (MPS IV), and it is not possible to predict the expected life span for a given individual. Those on the more slowly progressing end of the disease spectrum may have a reasonably normal lifespan. However, the availability of new and ever-improving treatments as well as other surgical procedures provides hope for better future outcomes for individuals affected by Morquio syndrome (MPS IV).

Morquio syndrome (MPS IV) has a highly variable phenotype. This means that some children may have many of the symptoms described below and may be severely affected while others may not experience all of the symptoms and have a milder presentation. There is currently no reliable way of telling from biochemical diagnostic tests how severe the disease will be. Detailed studies have shown that in individuals with attenuated, or slowly progressing, Morquio syndrome (MPS IV), a very small amount of active enzyme is working. This small amount of enzyme will digest some of the accumulating GAG, resulting in the disease being less severe than in an individual who has almost no enzyme activity.

DNA tests do not always correctly determine the severity of Morquio syndrome (MPS IV). Many different kinds of mutations(permanent changes) in the gene that produces the enzyme deficiency have been identified. The gene has been studied extensively to see if there is any relationship between specific genetic mutations and the symptoms of the disease. There are some common mutations of the gene that result in absolutely no enzyme being produced. If both copies of the defective gene inherited by an individual are of this kind, evidence suggests that the individual’s condition is likely to be at the severe end of the spectrum. Other common mutations of the gene cause very small amounts of defective enzyme to be produced, and still other mutations are not common at all and may only occur in a single known family. In these cases, it is virtually impossible to predict severity of disease using DNA analysis.

There is therefore no perfectly reliable way to determine the exact course of disease for individuals with Morquio syndrome (MPS IV). Even with the same small amount of enzyme activity, and even within the same family, there can be variations in severity that cannot be explained by the enzyme level or DNA mutation. It is important to remember that whatever name is given to your child’s condition, Morquio syndrome (MPS IV) is a spectrum with a variety of symptoms, and is extremely varied in its effects. This booklet addresses a wide range of possible symptoms that individuals with Morquio syndrome (MPS IV) may encounter; however, parents should be aware that their child(ren) may not experience them all or to the degree described.