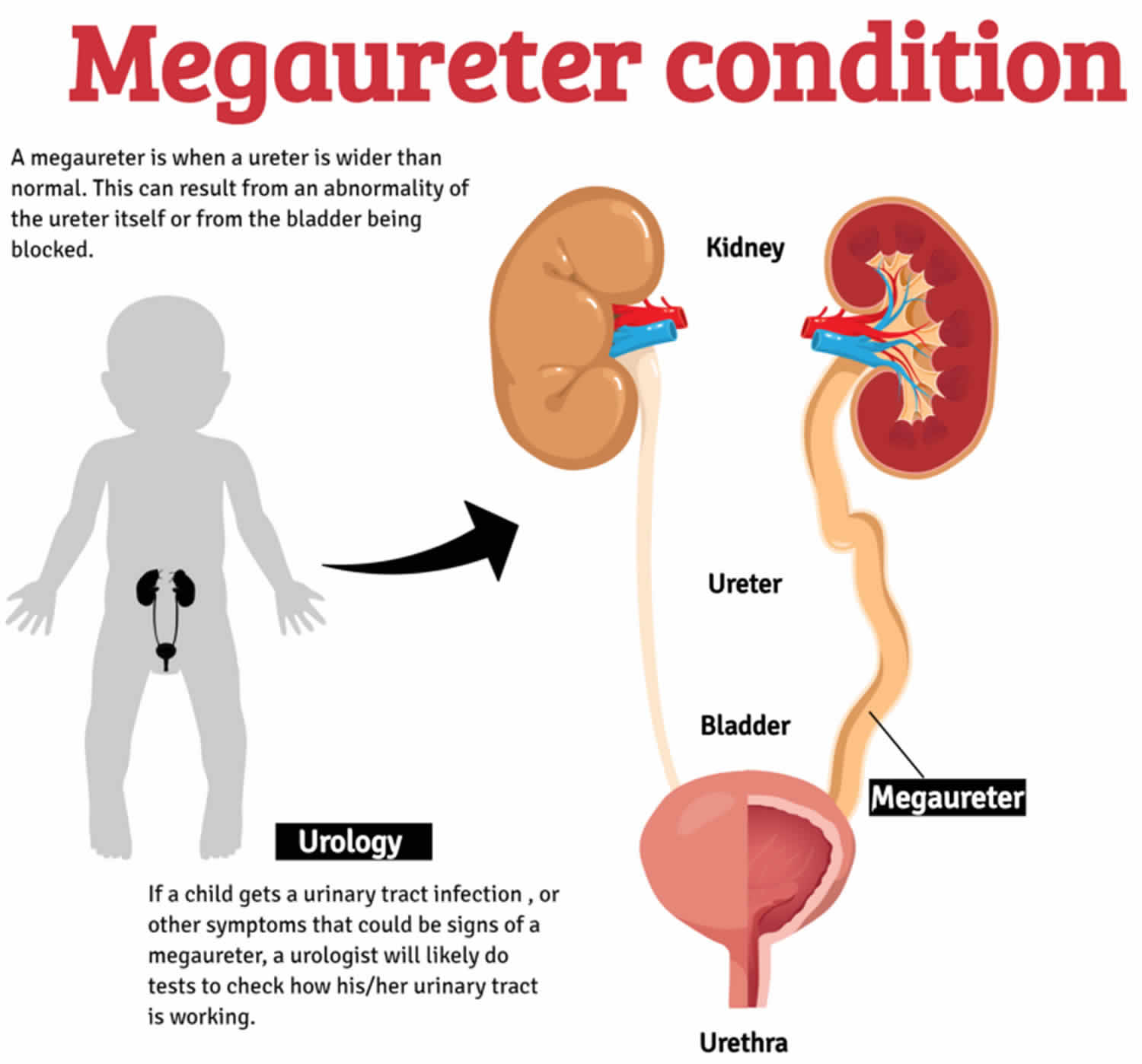 Megaureter is a descriptive term for dilated ureter or “large ureter”, which is an expanded or widening of one or both of the ureters of a child that does not function normally. Ureters are the two funnel-shaped tubes that carry urine from the kidneys to the bladder (Figure 1). Whereas a normal ureter is about 3-5 mm, the size of a megaureter is usually greater than 10 millimeters (three-eighths of an inch) in diameter. This can result from an abnormality of the ureter itself (primary megaureter) or from the bladder being blocked (secondary megaureter). The different types of megaureters are described below.

Complications associated with megaureter include reverse flow (or reflux) of urine into the kidneys and pooling of urine inside the ureter that does not drain due to blockage. The pooling can cause a child to develop a urinary tract infection. In some children, complications from megaureter can cause kidney damage and failure.

Despite worldwide availability of prenatal ultrasound, many patients with a congenital megaureter are not diagnosed until adulthood 1). Adult primary obstructive megaureter is usually a symptomatic condition and is related to high complication rates, including infections, stone formation, and renal failure 2). Spontaneous resolution is rare and prompt surgical management is advocated 3).

Megaureters are treated differently based on their cause. If there is reflux causing the megaureter, then it is treated with prophylactic antibiotics and occasionally endoscopic or open surgery as appropriate (please see section on vesicoureteral reflux).

If there is no obstruction and no reflux, the vast majority of these types of megaureters resolve with time and only periodic ultrasounds are performed to assess kidney growth. 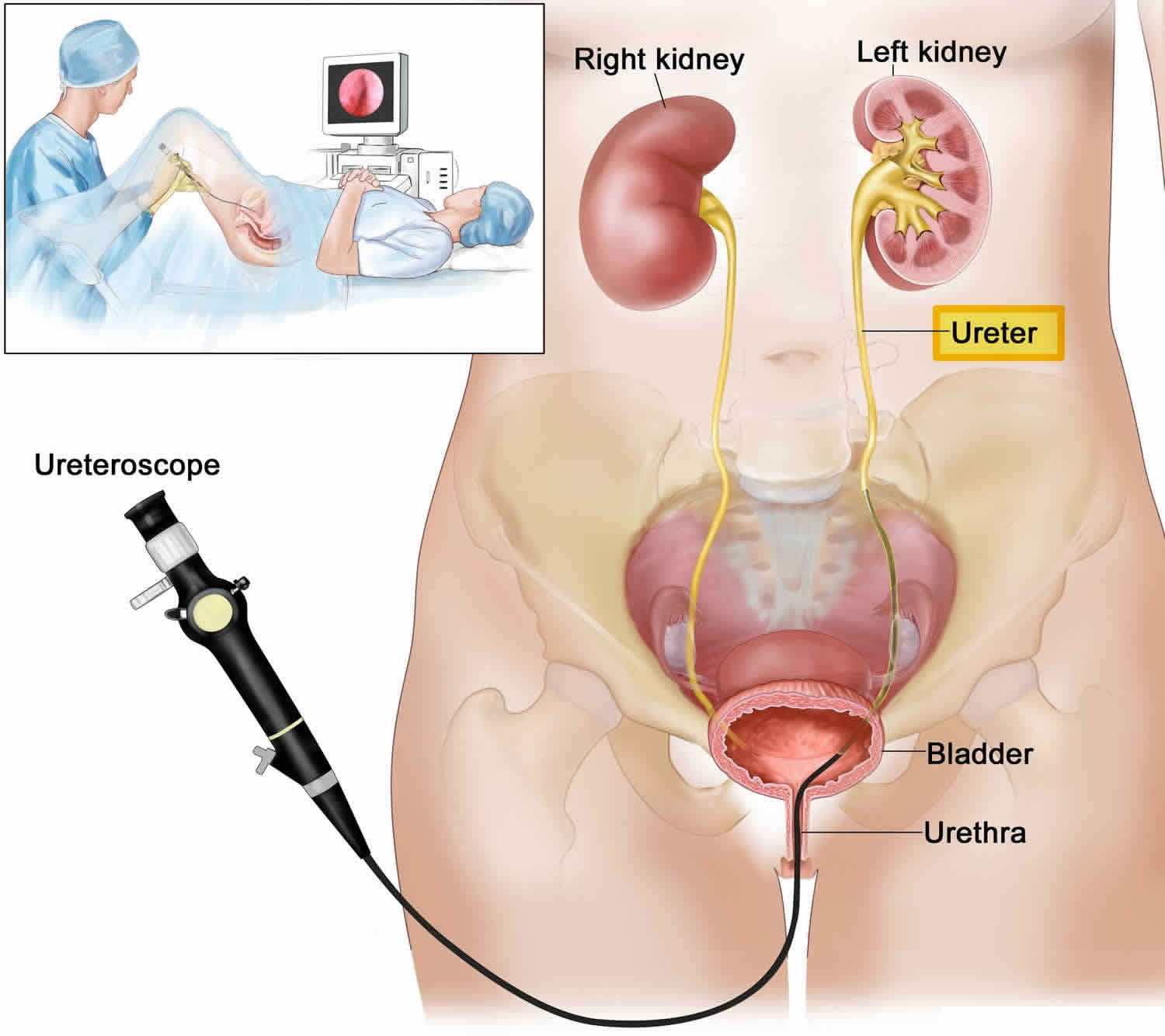 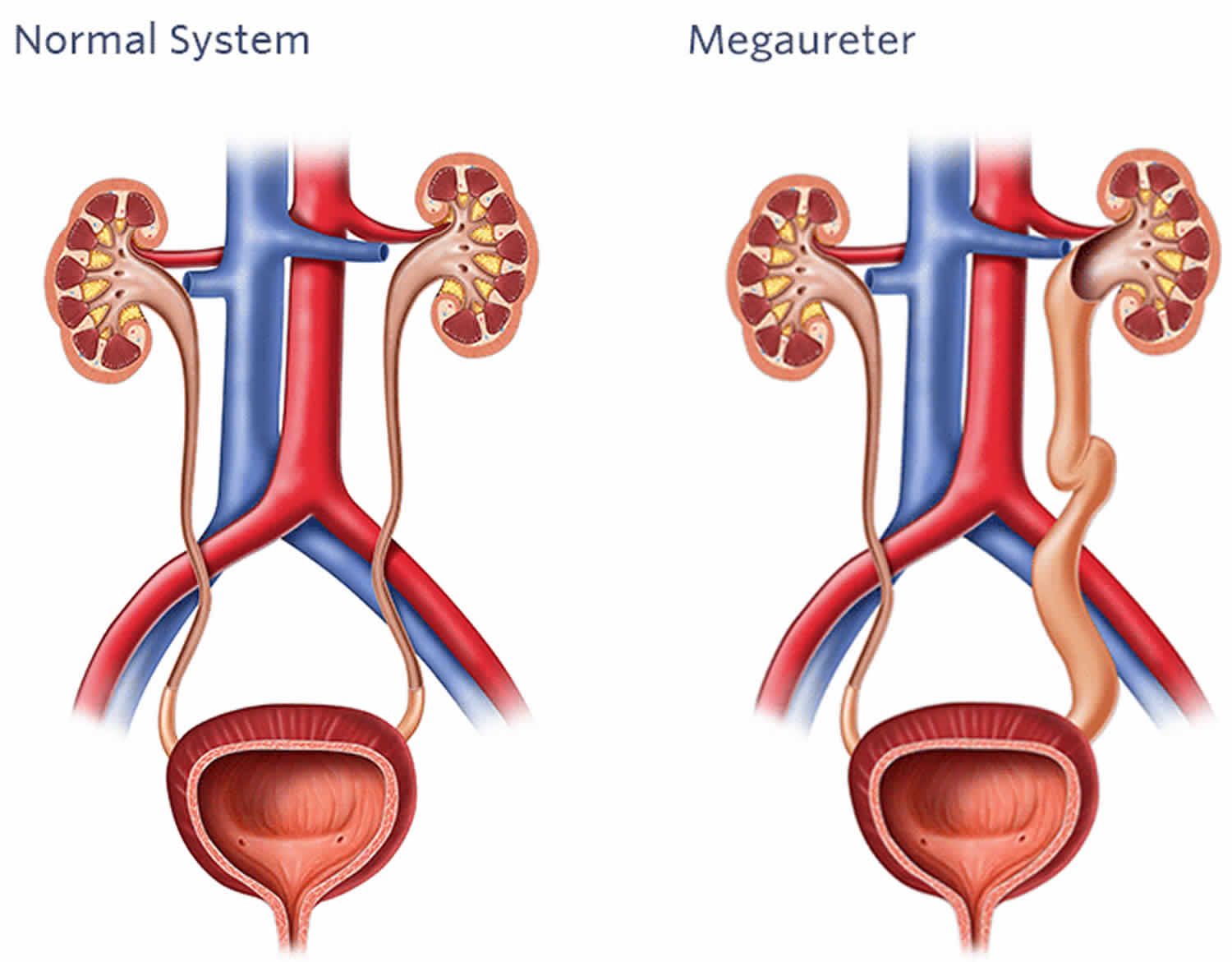 The kidneys act as a filter system for the blood. They remove toxins and keep the useful sugar, salts, and minerals. Urine, the waste product, is made in the kidneys and flows down 2, 10 to 12-inch-long tubes called ureters into the bladder. The ureters are about a quarter inch wide and have muscled walls which push the urine into the bladder. The bladder stretches or expands to store the urine until you’re ready to drain it by peeing. It also closes the pathways into the ureters so urine can’t flow back into the kidneys. The tube that carries the urine from the bladder out of the body is called the urethra.

Left untreated, megaureter can lead to infections, blocked flow of urine, and possibly serious damage to the kidneys.

Is surgery always needed to fix a megaureter?

No. Most megaureters found before birth get better over time without needing surgery. Megaureters found in older patients with pain or infection are more likely to need surgery. Antibiotics are often given to prevent urinary tract infection.

Is minimally-invasive surgery an option?

It may be possible to place a stent or catheter through the blocked part of the megaureter as a short-term fix to help the kidney drain. Laparoscopic techniques to fix megaureters are being explored.

Are there long-term problems to megaureter if I don’t do anything?

Possibly yes. They include:

There are two main types of megaureter:

There are also combinations of the two main types:

The 4 categories of megaureters are refluxing, obstructing, refluxing/obstructing, and nonrefluxing/nonobstructing. Each category is further divided into primary or secondary, based on either intrinsic or extrinsic causes for their appearance, as follows:

Another class of megaureters is known as secondary megaureters. These are caused by health problems that include:

Megaureter can occur alone, but usually it occurs in combination with other disorders, such as prune belly syndrome.

A megaureter that is not associated with other problems occurs during fetal development. It occurs when a section of the ureter, which is normally a muscular layer of tissue, is replaced by stiff, fibrous tissue. In the absence of a muscular layer, normal peristalsis (worm-like movement of the ureter that propels urine toward the bladder) cannot occur.

The goal with megaureters is to determine which are obstructed, which have the reverse flow of urine, called reflux, and which have both.

At this time, scientists don’t know if there are genetic links.

Congenital megaureter also called primary megaureter is an enlarged ureter which are intrinsic to the ureter, rather than as a result of a more distal abnormality; e.g. bladder, urethra (also called secondary megaureter).

In all three types of megaureter, patients are often asymptomatic. Symptoms, when present, are usually arise from complications due to urinary stasis (e.g. urinary sepsis and nephrolithiasis).

In all three types the ureter is enlarged (>7 mm) sometimes markedly so 6). On all modalities able to visualize the ureter (CT, US, MRI, IVP) it appears as a tubular structure usually posterior to the bladder 7).

Primary megaureter is usually asymptomatic and requiring no treatment. If complications occur or the degree of obstruction is marked then, reimplantation following resection of the aganglionic segment may be performed.

In obstructive primary megaureter the ureter tapers to a short segment of normal caliber or narrowed distal ureter, usually just above the vesicoureteric junction (VUJ). The distal ureter above this narrowed segment is most dilated (similar to achalasia). There is associated hydronephrosis, and active peristaltic waves can be seen on ultrasound.

Obstructive primary megaureter is related to a distal adynamic segment with proximal dilatation and is a common cause of obstructive uropathy in children 8). It is analogous to esophageal achalasia or colonic Hirschsprung disease although a lack of ganglion cells within the wall of the ureter has not been proven to be the cause 9).

This is thought to be the most common cause of primary megaureter in neonates, and even though the vesicoureteric junction is normal, with no evidence of reflux or obstruction the ureter is enlarged. The reason for this is unknown.

This type is caused by a ureter that’s blocked and also suffers from reflux. This is dangerous, as the ureters get bigger and more blocked with time. People with this problem are more likely to get urinary tract infections.

Each child may experience megaureter symptoms differently. The symptoms of a megaureter may resemble other conditions or medical problems. Always consult your child’s doctor for a diagnosis.

Because megaureters can cause severe infection or blocks that lead to kidney damage, this health issue can be serious. Urinary tract stretching may suggest a blockage, but that’s not always the case. In some cases, a dilated ureter may not affect the kidney at all. Also, most patients with megaureters found before birth don’t get symptoms. Also, occasionally flank pain can be seen or there may be blood in the urine. It’s important to have it checked to make sure it won’t affect the way the kidney works and cause problems later.

Most megaureters found before birth will improve over time without surgery. In older patients with pain or infection, surgery is more likely to be needed.

If nothing is done to correct megaureter, complications can include:

The severity of the megaureter often determines how a diagnosis is made. Often a megaureter is diagnosed by ultrasound while a woman is still pregnant. After birth, some children may have other problems that may suggest the presence of megaureter. Children who are diagnosed later often have developed urinary tract infections that require evaluation by a doctor. If your child gets a urinary tract infection or other symptoms that could be signs of a megaureter, check with your child’s doctor. A urologist will likely do tests to check how his/her urinary tract is working. This may prompt your child’s doctor to perform further diagnostic tests, which may include the following:

Experts have shown that as long as kidney function is not significantly affected and urinary tract infections do not become an issue, some megaureters can be managed medically 10). This may involve the use of antibiotic prophylaxis and radiology observation with repeated ultrasounds. When the dilation is severe without showing signs of improvement, or kidney function is affected, surgical repair may be necessary. Left untreated, megaureter can lead to infections, blocked flow of urine, and possibly serious damage to the kidneys.

Specific treatment for megaureter will be determined by your child’s doctor based on:

Your child may require antibiotic therapy as a precaution to prevent future urinary tract infections.

In some cases, medical intervention is not required because the megaureter will resolve on its own over time. If there is a blockage of the urinary tract, however, a megaureter may require surgical intervention. The surgical procedure involves removing the section of the ureter that is abnormal, reducing it, and reconnecting the ureter.

If tests show a block or impaired kidney function, your child may need surgery to fix it. The typical surgery for megaureters involves putting the ureters back into the bladder (“ureteral reimplantation”) and trimming the widened ureter (“ureteral tapering”). If your child doesn’t have a urinary tract infection or decrease in kidney function, the surgery can be delayed until he/she is 12 months old. Surgery in infants isn’t easy and should be done by surgeons skilled at neonatal surgery. Many babies are kept on antibiotics until surgery to help protect them from infections.

In children over 2 years old, balloon dilation of the narrowed part may be possible. The surgeon looks into the bladder with a long, thin telescope with a light at the end (cystoscope). A small wire is passed through the bladder opening and up the ureter. A balloon is used to stretch the narrowed part of the ureter. A silicone tube is left in the ureter for 4 to 6 weeks. Studies show this can clear the block and help most cases of reflux.

Minimally invasive methods, like injecting substances to fix reflux, don’t work well because of the abnormal connection to the bladder.

Laparoscopy is surgery done through thin tubes put into the body through a small cut. The surgeon uses a special camera to see inside the body and miniaturized tools. Laparoscopy for ureteral reimplantation is hard and requires a highly skilled laparoscopic surgeon.

For megaureters that require surgery, generally prophylactic antibiotics are continued for some time after surgery, and serial ultrasounds are performed to monitor the kidney. The surgery is very successful at relieving the obstruction.

Even if surgery is needed, the vast majority of children with megaureters go on to live normal lives.

Some problems that can arise from the surgery are:

A blockage of urine may occur soon after the operation or after a longer period of time. This problem is seen in only 5 out of 100 of cases, but it may require more surgery. Vesicoureteral reflux problems are seen after surgery in 5 out of 100 of cases as well. This may go away on its own. Most patients are followed for a number of years after surgery. Ultrasound is used to make sure the appearance of the kidney and ureter continues to improve. A renal scan is often done to make sure the kidney is working properly and that the block is fixed. A voiding cystourethrogram (VCUG) is often done a few months after surgery to check for reflux.

Cases of high-grade vesicoureteral reflux (VUR) are less likely to spontaneously resolve and more likely to put the kidney at risk of scarring due to pyelonephritis. Prevention of infection is essential to minimize the risk of renal damage; therefore, continuous antibiotic prophylaxis is usually used in children with high-grade vesicoureteral reflux (VUR) while awaiting spontaneous resolution. In the case of obstructive ureteroceles, treatment to relieve obstruction optimizes preservation of renal function, as chronic obstruction can lead to renal deterioration.