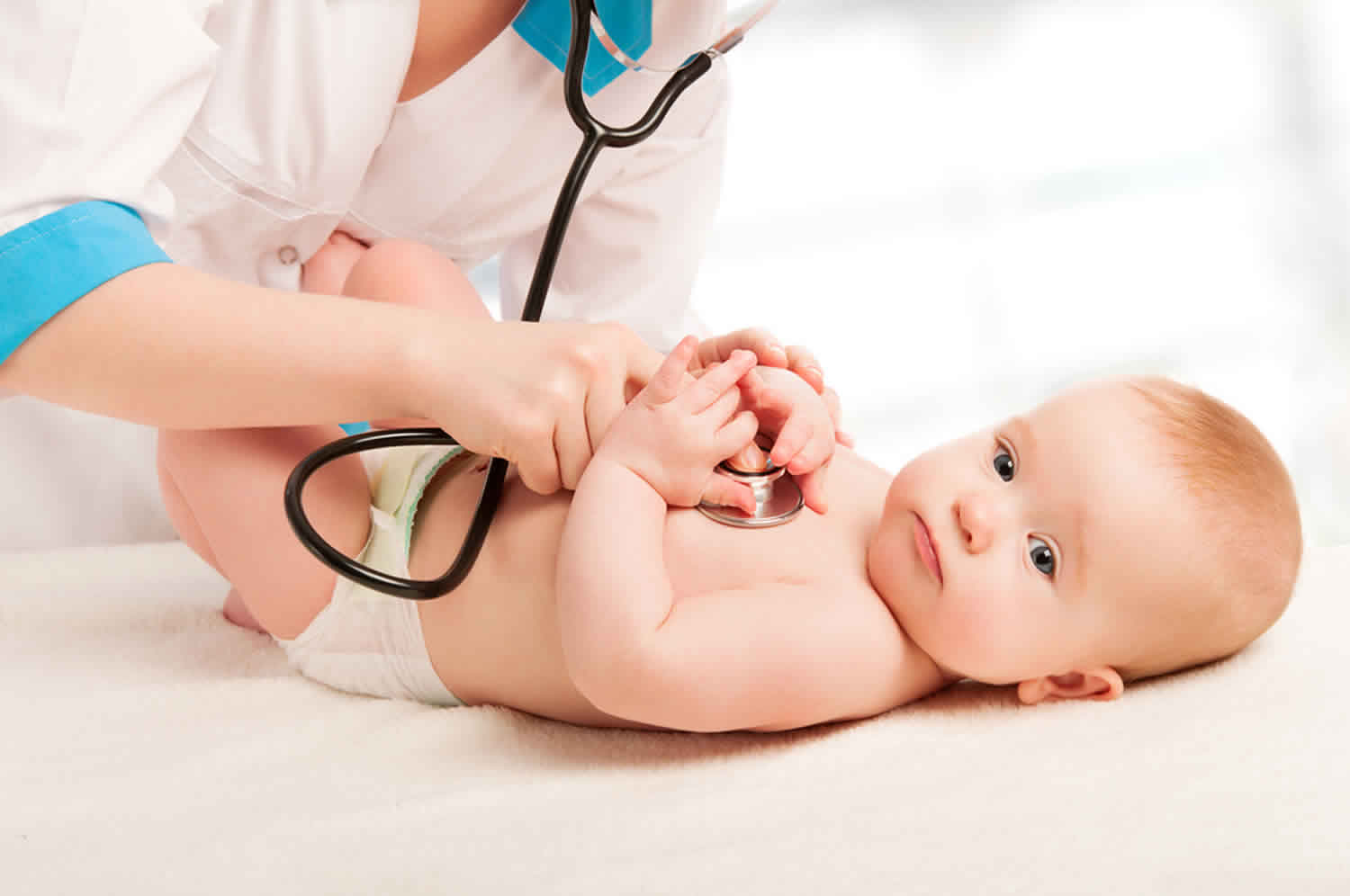 All babies have some anemia (decrease in hemoglobin concentration) when they are born. In healthy term infants, the nadir hemoglobin value rarely falls below 10 g/dL at an age of 10 to 12 weeks 3). This is normal and is called “physiological anemia of infancy”. For the term infant, a physiologic and usually asymptomatic anemia is observed 8-12 weeks after birth. But in premature babies, the number of red blood cells may decrease faster and go lower than in full-term babies. This may happen because:

Anemia of prematurity is an exaggerated, pathologic response of the preterm infant to this transition. Anemia of prematurity is a normocytic, normochromic, hyporegenerative anemia characterized by a low serum erythropoietin (EPO) level, often despite a remarkably reduced hemoglobin concentration 4). Nutritional deficiencies of iron, vitamin E, vitamin B-12, and folate may exaggerate the degree of anemia, as may blood loss and/or a reduced red cell life span.

The anemia of prematurity is caused by untimely birth occurring before placental iron transport and fetal erythropoiesis are complete, by phlebotomy blood losses taken for laboratory testing, by low plasma levels of erythropoietin due to both diminished production and accelerated catabolism, by rapid body growth and need for commensurate increase in red cell volume/mass, and by disorders causing red blood cell losses due to bleeding and/or hemolysis 5).

Race and sex have no influence on the incidence of anemia of prematurity.

Testosterone is believed to be at least partially responsible for a slightly higher hemoglobin level in male infants at birth, but this effect is of no significance with regard to risk of anemia of prematurity. The nadir of the hemoglobin level is typically observed 4-10 weeks after birth in the tiniest infants, with hemoglobin levels of 8-10 g/dL if birthweight was 1200-1400 grams, or 6-9 g/dL at birth weights of less than 1200 grams and to approximately 7 g/dL in infants with birth weights <1 kg 7).

Anemia of prematurity is usually not serious. Anemia of prematurity spontaneously resolves in many premature infants within 3-6 months of birth 8). In others, however, medical intervention is required, because the low oxygen levels in a premature infant can make other problems worse, such as heart and lung problems. Most infants with birth weight <1.0 kg are given multiple red blood cell (RBC) transfusions within the first few weeks of life 9).

The three basic mechanisms for the development of anemia of prematurity include:

Fetal erythrocytes are produced in the yolk sac during the first few weeks of embryogenesis. The fetal liver becomes more important as gestation advances and, by the end of the first trimester, has become the primary site of erythropoiesis. Bone marrow then begins to take on a more active role in producing erythrocytes. By about 32 weeks’ gestation, the burden of erythrocyte production in the fetus is shared evenly by liver and bone marrow. By 40 weeks’ gestation, the marrow is the sole erythroid organ. Premature delivery does not accelerate the ontogeny of these processes.

Erythroid progenitors in premature infants are quite responsive to erythropoietin (EPO), but the response may be blunted if iron or other substrate or co-factor stores are insufficient. Another potential problem is that while the infant may respond appropriately to increased erythropoietin (EPO) concentrations with increased reticulocyte counts, rapid growth may prevent the appropriate increase in hemoglobin concentration.

Also important in the development of anemia of prematurity is that the average life span of a neonatal red blood cell is only one half to two thirds that of an adult red blood cell. Cells of the most immature infants may survive only 35-50 days. The shortened red blood cell life span of the neonate is a result of multiple factors, including diminished levels of intracellular adenosine triphosphate (ATP), carnitine, and enzyme activity; increased susceptibility to lipid peroxidation; and increased susceptibility of the cell membrane to fragmentation.

Finally, blood loss may contribute to the development of anemia of prematurity. If the neonate is held above the placenta for a time after delivery, fetal-placental transfer of blood may occur. Conversely, delayed cord clamping may lessen the degree of anemia of prematurity 10), although a study by Elimian et al 11) did not find this to be true. More commonly, because of the need to closely monitor the tiny infant, frequent samples of blood are removed for various tests. These losses are often 5-10% of the total blood volume.

Conditions to consider in the differential diagnosis of anemia of prematurity are those which diminish red cell production, increase red cell destruction, or cause blood loss.

Conditions that diminish red blood cell synthesis are as follows:

Conditions that cause hemolysis are as follows:

Conditions that reduce blood volume are as follows:

Many clinical findings have been attributed to anemia of prematurity, but they are neither specific nor diagnostic. These symptoms may include the following:

The following are useful laboratory studies:

Observation may be the best course of action for infants who are asymptomatic, not acutely ill, and are receiving adequate nutrition. Adequate amounts of vitamin E, vitamin B-12, folate, and iron are important to blunt the expected decline in hemoglobin levels in the premature infant. Periodic measurements of the hematocrit level in infants with anemia of prematurity are necessary after hospital discharge. Once a steady increase in the hematocrit level has been established, only routine checks are required.

The decision to give a transfusion should not be made lightly, because significant infectious, hematologic, immunologic, and metabolic complications are possible. Late-onset necrotizing enterocolitis has been reported in stable-growing premature infants electively transfused for anemia of prematurity 13). Transfusions also transiently decrease erythropoiesis and EPO levels. There is also agreement that the number of transfusions, as well as the number of donor exposures, should be reduced as much as possible.

Clinical trials designed to determine the efficacy of blood transfusions in relieving symptoms ascribed to anemia of prematurity have produced conflicting results 14). Improved growth has been an inconsistent finding. While some studies have demonstrated a decrease in apneic episodes after blood transfusion, others have found similar results with simple crystalloid volume expansion.

Some medical professionals have suggested using lactate levels as an aid in determining the need for transfusion.

Transfuse to maintain the blood hematocrit per each clinical situation:

*Reflects practices that vary among neonatologists. Thus, any value within range is acceptable for local practices.

Reducing the number of transfusions

Studies from individual centers have documented a marked decrease in the administration of packed red blood cell transfusions in the past decades, even before the use of EPO became more frequent. This decrease in transfusions is almost certainly multifactorial in origin. Adoption of standardized transfusion protocols that take various factors into account, including hemoglobin levels, degree of cardiorespiratory disease, and traditional signs and symptoms of pathologic anemia, are acknowledged as an important factor in this reduction. A restricted transfusion protocol may decrease the number of transfusions while also decreasing the hematocrit at discharge 15).

These findings differ from the Iowa study, which found less parenchymal brain hemorrhage, periventricular leukomalacia, and apnea in infants whose transfusion criteria was not restricted and whose hemoglobin level was higher. Clearly, no universally accepted guidelines for transfusion in infants with anemia of prematurity are available at this time, and clinicians must determine their individual standardized transfusion practices.

No universally accepted guidelines for transfusion in infants with anemia of prematurity are available at this time, and clinicians must determine their individual standardized transfusion practices.

As an example, note the Children’s Hospital of Wisconsin Transfusion Committee guidelines for consideration:

It is of obvious importance to discuss with the family their child’s need for transfusion and to obtain consent before the transfusion. It is also important to discuss with parents the normal course of anemia, the criteria for and risks associated with transfusions, and the advantages and disadvantages of erythropoietin (EPO) administration. Also necessary is consideration of the family’s religious beliefs regarding transfusions.

Reducing the number of donor exposures

Reducing the number of donor exposures is also important. Preservatives and additive systems allow blood to be stored safely for as long as 35-42 days. This can be accomplished by using packed red blood cells stored in preservatives (eg, citrate-phosphate-dextrose-adenine [CPDA-1]) and additive systems (eg, Adsol). Infants may be assigned a specific unit of blood, which may suffice for treatment during their entire hospitalization and thus limit exposure to the single donor of that unit. Concerns that stored blood might increase serum potassium levels are unfounded if the transfused volume is low.

Potential complications of transfusion include the following:

An important tool in reducing at least one of these transfusion risks is to use all available screening techniques for infection. The risk of cytomegalovirus (CMV) transmission can be dramatically reduced by use of CMV-safe blood. This can be accomplished by using CMV serology–negative cells, along with blood processed through leukocyte-reduction filters or inverted spin technique. These methods also reduce other WBC-associated infectious agents (eg, Epstein-Barr virus, retroviruses, Yersinia enterocolitica) by yielding a leukocyte-poor suspension of packed red blood cells. The American Red Cross now provides exclusively leukocyte-reduced blood to hospitals in the United States.

Trials have evaluated the impact of EPO treatment in populations of the most immature neonates. These studies likewise have demonstrated that infants with very low birth weight (VLBW) are capable of responding to EPO with a reticulocytosis.

Studies and a Cochrane Neonatal Systemic review suggest an association between exogenous EPO administration and retinopathy of prematurity 19).

EPO with iron does not adversely affect growth or developmental outcomes, but the impact on the number of transfusions a premature infant receives ranges from nonexistent to small.

At this time, no agreement regarding the safety, timing, dosing, route, or duration of therapy has been established. In short, the cost-benefit ratio for EPO has yet to be clearly established, and this medication is not universally accepted as a standard therapy for an infant with anemia of prematurity.

Spontaneous recovery of mild anemia of prematurity may occur 3-6 months after birth. In more severe, symptomatic cases, medical intervention may be required.